After three years spent mainly on the sidelines, Kirk Cousins really proved himself as a starting quarterback in 2015, producing a very solid season for the Washington Redskins. The former fourth round draft pick leapfrogged Robert Griffin III in the quarterback pecking order, going on to start 15 regular season games for the franchise, as well as the Wild Card playoff loss against Green Bay Packers. With RG3 now a Cleveland Brown, it’s clear that Cousins is out to prove his elite status by starting next season as the Redskins number-one quarterback, although the 27-year old is still yet to agree a long-term deal with the franchise.

Having been placed under the franchise tag earlier in the offseason, Cousins know he now has a chance to earn an extended and lucrative new deal to stay in Washington. The quarterback might be keen to get his future sorted, but he has made it clear on a number of occasions that he is just happy to be playing regular football. This year, Cousins will make $19.95 million under the franchise tag, a figure which will significantly rise if he can improve on last season’s form.

Having shown glimpses of his talent in 2014, last season gave the quarterback a platform to really show what he can do in this sport. Throwing 4,166 yards and 29 touchdowns, Cousins rightly ended the year among the top 10 in his position in the season. As well as playing a major role in the Redskins reaching the playoffs after a two-year hiatus, Cousins’ performances last season also showed the fans that they may well have finally found the quarterback they have been searching for, no matter how they found him. 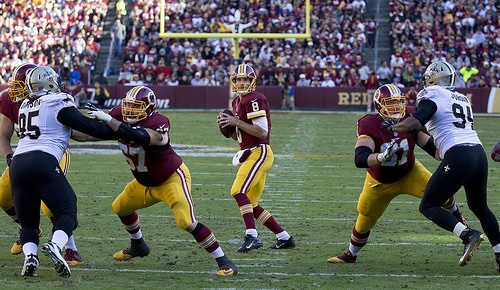 Another season recording the sort of figures he did in 2015 would see Cousins handed a top-level contract. While some Washington fans feel as though the franchise should have already tied the quarterback down to a new deal, considering how the Robert Griffin III experiment ended it’s no real surprise the Redskins have been cautious. Cousins himself is taking something of a risk by waiting until next year before signing a new deal, but the quarterback knows just how fruitful his patience could be.

Currently around 3/1 with the American Football betting odds to top the NFC East, Cousins and his team-mates won’t be expected to be genuine Super Bowl contenders in 2016. That said, stranger things have happened in the NFL, and a few exciting additions during the offseason could see this team surprise a few people next season.

The Redskins signal-caller certainly has the players at his disposal to enjoy a successful campaign in 2016. With a devastating tight-end line-up led by Jordan Reed, a clinical receiver corp including Desean Jackson, and one of the NFL’s most exciting offensive lines, Cousins will have plenty of tools with which to work next season. At just 27, the Washington quarterback is still yet to reach his prime, and another solid season this year would have some Redskins fans feeling as though they could have a real chance of doing something in this league next year.