Having been a heavy smoker for 15 years and shelled out thousands of pounds on patches and gum, I felt like I was running out of options, and I really didn’t want to go cold turkey.

During my search for other solutions, I came across V2, a US-based E-cigarette and vaporiser manufacturer with a UK website and customer service team. That’s when I noticed they’ve got a new vaporiser pen out – the V2 Pro Series 3 – and I have to say, so good so far.

It’s a pretty nifty design as it’s a three-in-one pen that allows you to vape e-liquid, loose leaf and wax, making it a suitable option for various types of smokers and vapers.

I was conscious about how much I’d already spent on trying to quit so I wanted to get something that I felt would really help. I started off by ordering V2’s standard package, which included the pen itself, a magnetic USB charger lead, a magnetic e-liquid cartridge and a wall adapter.

I’ve got to say I was thrilled when it arrived because the design is great, and the pen looked smart and expensive – not like some other brands I had seen. Delivery was fast – I only waited two days, so no complaints there.

The manual recommended that my pen needed a full charge of around 2.5 hours before the first use, but I found it was ready to use in half that time. The charger itself was really easy to use as the charging end is magnetic so it just clipped onto the bottom of the pen. One feature I love is the charging light at the bottom of the Series 3 which flashes red and then turns blue to let you know when it’s ready to go.

The pen is a bit bigger than a biro and is a nice weight to hold for a while. I chose the blue colour but there are also black and stainless steel versions.  Flush to the rest of the pen is the vape button, so I wasn’t worrying about it setting itself off in my handbag. Plus, another great feature is the mouth piece, which is made of hard plastic to protect your mouth from the heat.

The vapour produced by the Series 3 is amazing. Simulating a real cigarette is important to me as I like the physical action of smoking, so this pen was perfect. 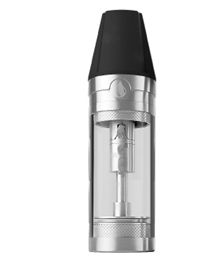 Alongside my pen, I bought 25ml of the V2 platinum e-liquid, in the V2 Red flavour. The taste was really rich and actually tastes of tobacco, which is helping me to cut down on cigarettes. Using the bottle to fill up my e-liquid cartridge was simple as it is designed with a tiny nozzle. You just need to make sure you are careful to not drip any liquid into the centre post of the cartridge.

As I mentioned before, the Series 3 lets you vape liquid, wax and loose leaf. Each different ingredient has its own cartridge, and it’s really easy to swap them in and out, thanks to V2’s clever magnetic technology. All you have to do is drop one into the battery cartridge and the pen instantly recognises which of the three vape types you’re using. I’m just about to start the loose leaf. I haven’t used wax cartridges yet, however the reviews I read were positive.

Overall, I’m really pleased with the Series 3 and I think other beginners would enjoy using it too. Even seasoned vapers would find the pen good to use as it produces great vapour and is helping me to cut down on smoking. Heavier vapers may find they need to charge the battery up more but I think they’d love the quality of the pen.